The first soldiers of the First Brigade of the Royal Danish Armed Forces arrived in Latvia on April 26, demonstrating Denmark's determination to contribute to the protection of NATO's eastern flank.

"Denmark is a reliable ally of Latvia and has repeatedly confirmed its readiness to strengthen the security of our region, deploying about 750 soldiers of the Royal Danish Armed Forces to Latvia in addition to Denmark's current participation in NATO Multinational Division North Headquarters. The presence of Danish soldiers in Latvia and participation in joint military exercises with our and Allied soldiers will promote the compatibility of the Alliance's armed forces, readiness to jointly respond to any security challenges and make the people of Latvia feel safer,” underlined Latvian Defense Minister Artis Pabriks.

”Denmark has a long lasting tradition of contributing to the security in the Baltic Sea Region. In addition to our troops in NATO’s enhanced Forward Presence in Estonia, and several deployments of fighter aircraft to NATO’s air policing missions in the Baltic countries in recent years, we are now deploying a Danish infantry battalion to Latvia in order to send an unequivocal message of our commitment to stand shoulder to shoulder with our NATO allies. In light of Russia’s absolutely disgraceful behavior and unjustified attack on Ukraine, Alliance cohesion is more important than ever and Denmark stands ready to do our part,” said Danish Defense Minister Morten Bødskov.

The Latvian National Armed Forces will provide host country support by hosting the Danish troops at Ādaži military base. They will be a part of the Land Forces Mechanized Infantry Brigade. During their stay in Latvia, Danish soldiers will take part in joint exercises with the National Armed Forces and units of other Allied countries.

Soldiers and technical units of the Danish Armed Forces, including armored vehicles, will continue to arrive in Latvia over the next days, until the beginning of May.

As previously reported, a strong majority of the Danish parliament approved a proposal on 21 April to send up to 1,000 Danish troops to Latvia, in response to Russia's invasion of Ukraine.

Danish soldiers are already serving in NATO's Multinational Division North Headquarters (MND N HQ) in Ādaži military base. The MND N HQ was established in March 2019 with the aim of improving the defense of the Baltic States and to strengthen NATO's collective deterrence and protection by providing a command element in the Baltic region. The tasks of the HQ are defense planning, the organization and conduct of military exercises and activities in order to increase the interoperability of the participating states enabling them to jointly carry out defense missions. The tasks and duties of MND N are mainly performed by officers of the framework countries - Latvia, Estonia and Denmark.

For more than 100 years, the close diplomatic relations between Latvia and Denmark have been based on the common interests of ensuring stability, security and prosperity in the Baltic Sea region, Europe and the world. The two countries maintain an active political dialogue on both bilateral and regional levels, as well as in the European Union, NATO and other international organizations.

Denmark has played an important role in the development of the Latvian National Armed Forces and has been one of the leading Nordic countries in providing political support and practical assistance to Latvia.

For the attention of the Latvian population!

Upon arrival at Latvian airports and seaports, the military and support equipment of the Royal Danish Armed Forces, as well as military personnel, will be moving to several destinations throughout the country in the coming days.

Until the beginning of May, the movement of Danish military transport columns in populated areas, including Riga, as well as on the country's main and regional roads will be organized in a way to minimize the possible impact on daily traffic. The escort of military columns along Latvian roads will be provided by the Military Police, the State Police or the Relocation Coordination Center. In some cities and towns, including Riga, Latvian or Danish soldiers in uniforms will be stationed at road junctions, which will indicate the direction of travel for military columns, but will not restrict road traffic in any way. The National Armed Forces call on the people of Latvia to be aware of the movement of Allied forces entering Latvia on public roads to previously planned destinations.

In order to ensure the awareness of the Latvian population, the National Armed Forces will regularly publish up-to-date information on the movement of Allied military equipment, host nation support tasks and deployment of Allied forces in Latvia, as well as on military exercises in various regions of Latvia. 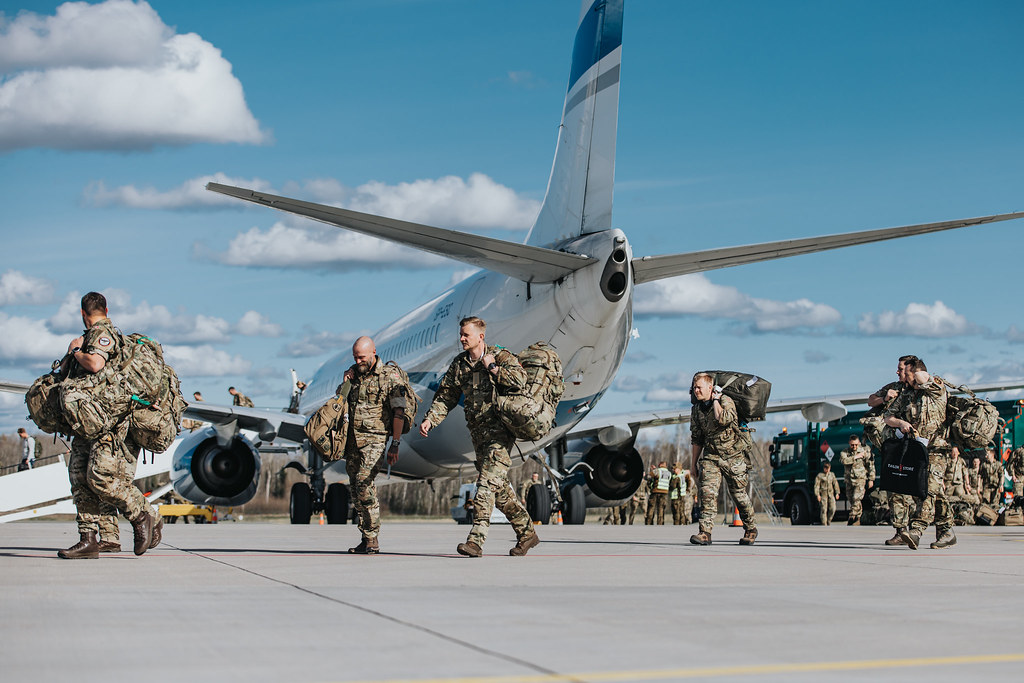